Just a short and sweet report this week – in sharp contrast to the race itself, I might add. I was running in the Eddie Murphy Memorial last Sunday – the race was to commemorate the life of an Irish runner named Eddie Murphy, who had completed 45 marathons before his untimely death in April 2011. There was a half-marathon, full marathon, a 30-mile ultra and a 52.4 mile double-marathon on the day. Between the four events, there were 100 competitors, of which 17 (including yours truly) attempted the double.

It was an absolutely miserable day in Sixmilebridge, Co. Clare from start to finish. The route was run on a one-mile loop of the village. If memory serves correctly, about one third of that loop was uphill, which was fine at the beginning but got progressively more difficult as the day wore on. We began the double at 7am and the rain began to pelt down a couple of hours later. It never stopped. About halfway through, gale-force headwinds began to push against us on the downhill portion of the route – so much for the recovery part of the route! At one point near the end, I even saw a lightning strike in a nearby field – that really speaks volumes about the mentality of the competitors, lightning literally struck and nobody batted an eyelid!

Anyway, to cut a long story short, I failed to finish this time. Obviously it was incredibly disappointing, firstly because that had never happened to me before and secondly, because I was only seven or eight miles from the end. However, the medical team judged that I was pretty close to hypothermia, and made a judgment call. In hindsight, it turned out to be correct, although at the time, it didn’t stop me complaining in the loudest possible language! After about an hour in the back of the ambulance, the lads dropped me off at a local B&B, where I stayed on till lunchtime the next day. I’d just like to say a quick word of thanks to them for looking after me, and getting me back to said B&B in once piece! Final stats on the day were 46 miles in just over nine and a half hours. Tomorrow morning, I’m back on the road for a marathon in the Phoenix Park. Soon after that’s done, I’ll hopefully have a full report up from the Dublin marathon from the end of October. For now, some shut-eye is definitely required… 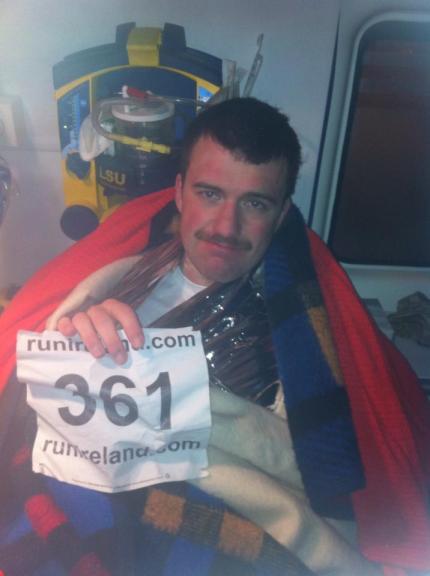