Running in the Kingdom

by Running for Reachout on September 4, 2012 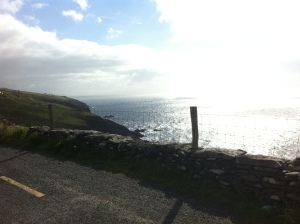 This is the 32nd post I’ve uploaded since I started this blog. Over the last few months, some of the posts have been really difficult to write. When the other guys are chugging the post-marathon Gatorades and relaxing in their ice-baths, you’ll find me frantically trying to throw together a race-report and maybe even organise a fundraising event in time for the next race.  In spite of a ton of work, I’m pretty sure I didn’t properly convey the experience of running the 100-miler in Connemara or even the Madventure or the 3-in-3, but today … no sweat! This week, the pictures are going to do the talking, and I’m just going to kick back, and maybe pop my head up from time to time to throw in a few half-assed observations and some lame picture-based humour. This week’s post is quite literally a walk in the park. It’s all about a race in the one of the most spectacular corners of  the country, a place called Dingle in Co. Kerry, and if this doesn’t make you want to run a marathon in Ireland, nothing will.

It seems that whenever I go to Kerry, it’s exclusively for crazy purposes. For me, getting there requires a five-hour drive and my last visit was nearly a year ago, to climb Carauntoohill (Ireland’s tallest mountain).  Co-incidentally, this was on the same weekend as the Dingle Food & Wine Festival. Having lost my wallet on the way down the mountain, I spent most of the festival wandering around Dingle while guzzling nutella straight from the jar with a spoon. 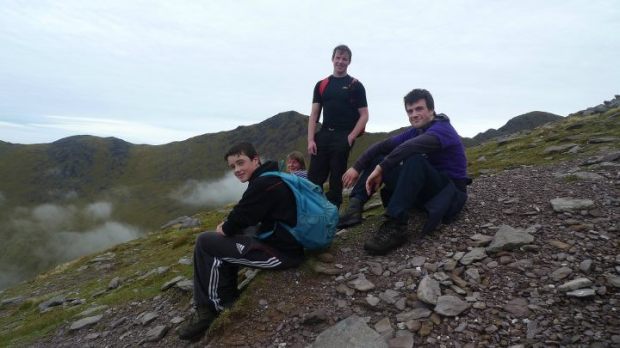 Fast-forward to this year and despite the travel requirements, a huge international crowd descended on Dingle for last Saturday’s marathon. Although I haven’t been able to find official reports, I’ve been told that somewhere around 2,300 people lined out for the half, full and ultra-marathon events (The 50-mile ultra alone attracted 60 hardy competitors)  All of which made for a festive atmosphere at the start-line.

Dingle is what my Drogheda club-mate Gerard Fay calls a “real” marathon – lots of elevation (gaining roughly 1500 feet), unbelievable scenery and a great atmosphere. It takes place right at the edge of the peninsula, and the course passes bays, historic sites, famine cottages and goes up plenty of hills! 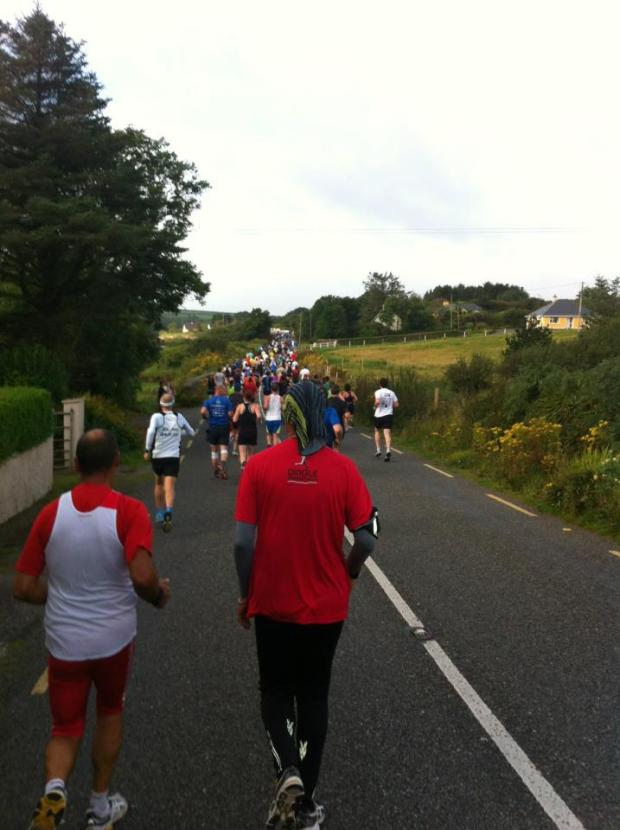 I had to run backways up a hill to get this shot … but totally worth it. 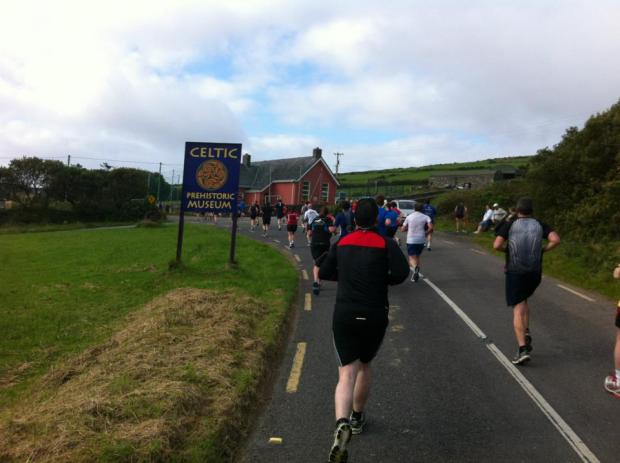 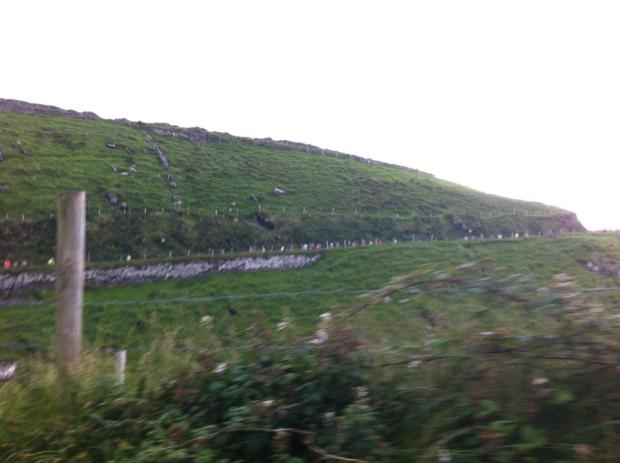 I do have one good story though; about 15 miles into the race, I met up with a runner from Cork named Barry who was running his first marathon. (Doesn’t anybody just do a nice easy course for their first marathon anymore?!) Barry was running in aid of a cancer charity and had set a goal for himself of finishing in under 4hrs30min while his friend had set a goal of 5 hours. As I hadn’t any particular plan in mind other than finishing, I decided to try and pace them. By Mile 20, it was just myself and Barry, at which point the course took a rather arbitrary turn, requiring runners to hang a left down the Emlagh East Road towards Gallarus, before reaching a traffic cone, turning around and coming back up the way we came, and continuing on. This little head-trip is immediately followed by the monster hill that everyone was telling each other about before the race (about 320 feet of a climb), followed in turn by a mile-long straight section that appears to stretch out forever, on the way back into Dingle. Barry was in a great deal of pain with cramping but managed to put in a massive effort. By the end, he was moving really well and we both ended up sprinting into Dingle, crossing the line at the same time and beating his target by about a minute. His friend crossed the line shortly afterwards, beating his own target by about twenty minutes. It was a really extraordinary display of willpower on Barry’s part and a fantastic result, especially considering it was his first marathon. For my own part, I’ve rarely gotten as much as satisfaction from a race, and was very happy to help out. Roll on Sligo!