On Sunday the 13th of May, I ran in the Kildare Marathon. It was only the third time this marathon, which starts from the world famous Curragh Racecourse, had taken place.

My preparation was to put it mildly, less than ideal. The previous weekend, I had run three marathons in as many days. On the second of these, in Limerick, I had come tantalisingly close to breaking four hours, missing out by just a few minutes. I managed to avoid getting injured, but my legs were completely swollen the whole way down and my feet wouldn’t fit into my shoes for two days afterwards; it took the whole week for them to return to their normal size. So naturally, training was pretty unpleasant that week!

Also, there is a rule of thumb when it comes to marathons. It’s usually left unwritten but most runners seem to agree with it, and that is that one should always try to get plenty of sleep  … and should definitely never EVER go out partying the night beforehand. So to cut a long story short, I went to my rather fantastic friend Meghan’s birthday party and ended up getting somewhere in the region of two to three hours sleep that night.

Also, I hadn’t really followed my diet plan at all that week. I had a forty minute drive the next morning to get to the Curragh Racecourse and got a sandwich with a gatorade from a petrol station on the way there. I hadn’t even thought to buy more gels, so I only had the three that were left over from the previous week. Finally, it was a swelteringly hot morning, and it would only get hotter as the day wore on. So to sum up, I was expecting nothing special.

I ended up surprising myself. The full route results are uploaded here; I started off with the 3hr45min pacers and kept them in sight for as long as possible, although I eventually fell slightly further back. At time of writing, the main details that stick out for me occurred during the last four miles as we were coming into Kildare town. Hills were run that normally would have been walked, all the gels and water had long since been used up, and to put it delicately, there was some stomach unpleasantness towards the end. 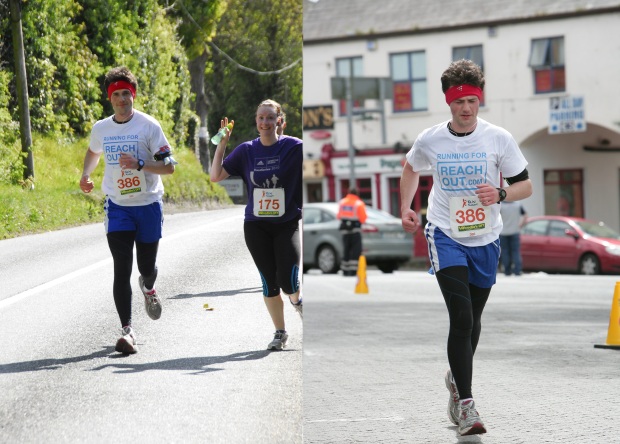 The first four miles were fun, the last four – not so much…

When it comes down to it, finishing under four hours is simple – you just can’t stop running. You can briefly stop for water but that’s about it. This is obviously easier said than done but I think the fact that I have a worthy cause to run for does help. Also I have wonderful friends that love and support me, and think that what I’m doing is good. You wouldn’t believe how many tough spots that dug me out of, it makes all the difference in the world.

Next marathon is in Portumna on June 16th.

Leave a Reply to Running for Reachout Cancel reply